10 Insider Tips That You Need To Know About Running A Franchise!

It’s hard to believe that it has been a whole year since I was awarded and invested in my Creation Station franchise. Even with all the research that I did, I still couldn’t have imagined the journey that I would take over the last twelve months and the amazing changes that I would see in my life as a ‘Franchisee Mummy’. 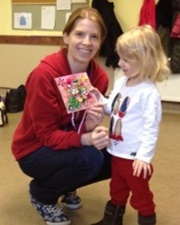 I decided that I would reflect on my experience and put together a list of 10 things that I believe are important for any Franchisee Mummy to know – or someone even considering making the leap!

A little bit about me

Ever had one of ‘those’ moments where you just know that you could keep walking the same path and probably still be in exactly the same spot in another 5 years? That was me 12 months ago. As my second stint of maternity leave was creeping by I had that sinking feeling that I’m sure many people have had at some point or other. Don’t get me wrong – I worked for a fantastic employer, with great benefits but after 9 years I had done every job in the department and had well and truly hit the ceiling when it came to promotion. I needed more but had no idea what that ‘more’ was. In the space of three years I had gotten married, moved house and had two beautiful children. With so many lovely changes in my life I had no idea that after the dust settled I would be left feeling this way.

If you could have looked into a crystal ball back then and seen me now I’d understand how you’d think that I’d totally lost the plot! I’ve left my job in HR, invested in a ‘Creation Station’ franchise and now provide Art & Craft activities for children….

Its hard work, my muscles ache and my days are now a lovely (if not sometimes odd) mix of random things – everything from testing out new session plans and learning how to achieve the ideal ‘gloop’ consistency (critical!) to balancing the accounts and researching how to effectively target my advertising on social media – no two days are ever the same and I would not change that for anything.

I come from a varied working background, mainly in Human Resources, but along the way I have also worked in I.T, been a soldier in the Army Reserve Forces and even worked one season as a horseback instructor at a Texan summer camp! What I’m getting at is that I don’t believe that you need to have one particular background to become a business owner. With advice, support and training becoming more accessible all the time, what is truly essential is that you love what you are doing and that it gives you a sense of achievement.

I won’t lie and say that I’ve never had moments where I wished for a fixed monthly salary again, but those moments were very (VERY!) short lived. I would never want to give up the flexibility that I have been able to achieve by owning my own business, nor the happiness that I get from seeing my customers excited faces each week.

I have been incredibly fortunate. I have an awesome husband who has supported me unwaveringly. I have been able to take that scary leap and ‘just see what happens’ and so far things are looking…..SHINY! :)

Does the Creation Station sound like it could be the right fit for you? Are you interested in finding out more about the franchise opportunities then click below

Katie is running her Creation Station classes in Renfrewshire as she wanted to improve her quality of life.

Lyn runs her Creation Station classes in Watford and Rickmansworth

Meet Tracy the new 'Head Of Inspiration' at The Creation Station Yarm.

Reshma was a chartered accountant who had a dream of being self-employed so she started a Creation Station franchise in Eastbourne.

Celebrating Success With Hayley From The Creation Station Swindon South

Hayley's passion to achieve a flexible work balance and encourage children to ask questions and solve problems creatively has led her to an exciting new career!

Passion And Perseverance Brought Award-Winning Parties To Lancaster And Kendal

From Mermaid To Award-Winning Parties In Brighton and Hove

Abby Newall is Inspiring Minds in Chichester and Arundel

Sarah is inspiring the children and adults of Bury North with classes, parties, events, and more!

Chantal Craig is Inspiring Minds in Hitchin And Letchworth

Lisa Hagg tells us about her six years with her Creation Station franchise and her highlights from 2016 so far.

Thinking about changing your career for something more rewarding and flexible?

Find out how Cathy Huston changed career and now runs her own Creation Station business in Preston.

The Creation Station are pleased to introduce Shobhana Sankar

Shobhana Sankar inspires imaginations with The Creation Station in Surrey.

Ruth Morris, owner of The Creation Station Aberdeen and winner of the Best New Franchisee 2014, shares her story of her first year running her own successful business.

The Creation Station are pleased to introduce Tracy Hull

Tracy Hull who runs her Creation Station business in Basingstoke says "I live being a role model to my children.....".

Sarah Finan has taken control of her working life and now inspires children's imaginations with her own Creation Station business.

Liz Cairns passes on her reasons for joing the The Creation Station.

Karen Carnsen says that The Creation Station has given her the confidence to be her own boss and she is very positive about the future.

I wanted to have the freedom of choosing my work hours to fit around family life. I knew I wanted to work with children and be my own boss.

Running my own franchise with a nationwide brand that shared my family and personal values was the obvious choice for me.

Jackie wanted to ensure she had time with her pre-school children but wanted to steadily build a rewarding business that could grow further when they started school.

Lucy wanted to give something back to her community and found the values of The Creation Station could help her achieve a fulfilling and rewarding business opportunity.

Following the birth of her twins, Hayley Sugden wanted to go back to work and The Creation Station franchise provided everything she wanted.

I've been running my franchise for a year and I love running my own business and being in charge of my own future. It has enabled me to enjoy more time with my family than I would otherwise have had and allowed me to see my baby grow into a little boy.Claire Darnley

I invested in my Creation Station franchise just over a year ago and haven't looked back since!Sara La Roux

I've been running my own Creation Station franchise since the end of last year and love it! The head office team are fantastic and the support and advice I've received from them has been invaluable.Kirsty Hickson

MAP is offering franchisees the support and training required to become a fully qualified IFA and to run their own… t.co/LR1llaPtnm